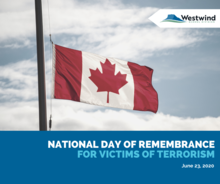 The Government of Canada has declared Tuesday, June 23, as a National Day of Remembrance for Victims of Terrorism. This day recognizes the anniversary of the bombing of Air India Flight 182 off the coast of Ireland in 1985. In total, 329 people lost their lives, most of whom were Canadian. This event marks the most significant terrorist attack in Canadian history. Westwind School Division recognizes this day by flying our flags at half-mast in honour of those who lost their lives aboard Air India Flight 182 and their families, as well as all other Canadians who have been victims of terrorist violence.