Westwind School Division is aware of a concerning trend of e-cigarette and vaping devices use by students in our division, and across the country.

According to the University of Alberta School of Public Health, the rate of teen vaping in Alberta increased to 22 percent in 2017 from eight percent in 2015. In 2017, 1 out of every four teens aged 15 to 19, and 3 out of every ten young adults aged 20 to 24 said they had tried an e-cigarette.

Our top priority is the health and wellbeing of our students. We recognize that the adolescent years are times of crucial brain development, and nicotine exposure during adolescence and young adulthood can cause significant addiction and harm to the developing brain.

We strongly encourage parents to use the resources provided below to talk to their children about the harmful and addictive nature of vaping, and it’s long term effects on the body and brain.

What is a Vape? 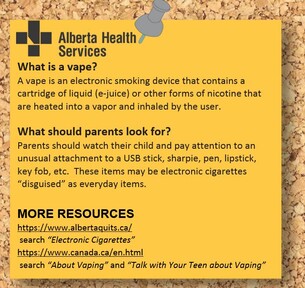 Vaping is the act of inhaling and exhaling an aerosol produced by a vaping product, such as an electronic cigarette. Vaping doesn’t require burning like cigarette smoking. The device heats a liquid into a vapour, which then turns into aerosol. This vapour is often flavoured and can contain nicotine.

Vaping devices are usually battery-powered. They may come with removable parts. Vaping products have many names, including:

They may also be known by various brand names.

There are many vaping products on the market, however, the most popular device is called a JUUL. A JUUL can be easily disguised because they are intentionally designed to look like an ink pen, a flash drive, or a handheld electronic device, such as an iPod.

Talk to Your Teen About Vaping 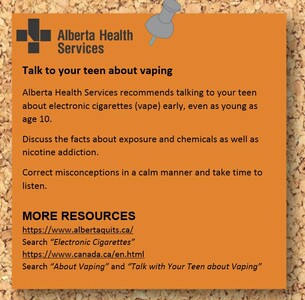 How to Talk with Your Kids About Vaping

Health Canada: Tip Sheet for Talking to your Teen about Vaping

VIDEO: CONSIDER THE CONSEQUENCES OF VAPING

Vaping is Not Harmless 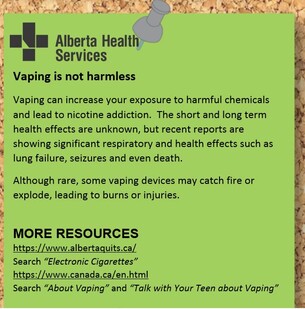 A common misconception about vaping is that they are only flavored water vapour. In fact, all JUUL pods contain an extremely high level of nicotine, and as the trend continues, authorities are concerned about the potentiality of vaping devices being laced with marijuana and other types of drugs. Youth and young adults are attracted to the candy and fruity flavours that are offered but do not realize what the harmful ingredients are inside them.

Our youth and young adults are also uniquely at risk for long-term, long-lasting effects of exposing their still-developing brains to nicotine and the many other harmful chemicals in the vaping liquids. These risks include nicotine addiction, mood disorders, and permanent lowering of impulse control. Nicotine also changes the way synapses are formed, which can harm the parts of the brain that control attention and learning.

What is in E-Cigarette Liquid? 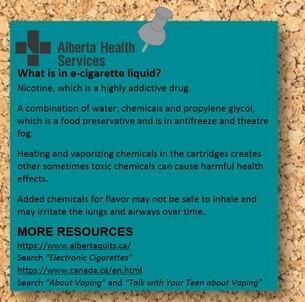 E-cigarettes can contain harmful and potentially harmful ingredients, including: 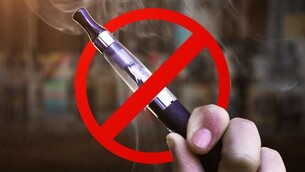